In recent history, 3D printing has gone mainstream, but its origins date back further than you might think. Since its early days in the 1980s, 3D printing has evolved from an experimental technology with few applications, to one of the most versatile production methods in the world.

In this article, we’ll revisit the decades-long history of 3D printing and the many developments it has experienced along the way. We’ll span the evolution of 3D printing capabilities over the years, and all the way to the breakthrough technologies of today.

The more you know about the history of 3D printing, the more you’ll understand its ever-growing potential, how to select the most capable vendors for 3D printing services, and how to ensure your next project is optimized for success.

What is the History of 3D Printing?

The Teletype Corporation made 3D printing history in the 1960s with Inkjet technology, a way to electronically transmit a drop of material onto paper. The first device could print up to 120 characters per second and used materials like melted wax.

In 1971, Johannes F. Gottwald patented his device called the Liquid Metal Recorder. The goal of this device was to arrange liquid metal droplets in a pattern that would form into a solid metal object once dried. The patent is now regarded as the precursor to rapid prototyping and 3D printing.

Inkjet technology and the Liquid Metal Recorder led to the invention of material extrusion, in which thermoplastic materials are run through a heated nozzle and layered in sequence (much like modern 3D printers). This represented a major advancement, but the plastic materials were only good for basic rubbery molds and models.

In 1980, Dr. Hideo Kodami took Gottwald’s guiding principles behind the Liquid Metal Recorder and, instead of liquid metals, applied them to thermoset polymer. His research concluded that the plastic material would harden upon exposure to light and would be optimal for 3D printing.

In 1982, defense contractor Raytheon patented a powdered metal, instead of liquid, that could replicate the functionality of the Liquid Metal Recorder.

In 1984, inventor Bill Masters mentioned “3D printing” for the first time in his similar patent for the Computer Automated Manufacturing Process and System.

Two years later, a patent in France described a photochemical process to make materials bind on a surface, and the worldwide race to invent the first 3D printer was officially on.

The First 3D Printer in History

An inventor named Chuck Hall built the first 3D printer in 1987, which used the material extrusion process to print materials based on the spatial dimensions of a computerized data file. The 3D printing was very basic and produced one layer at a time. He went on to patent many more concepts, including the STL file that is still used in project developments today.

In this early era of 3D printing history, materials were prone to warp quite often. 3D printers were extremely expensive and limited to commercial industry manufacturing plants. It would still be some time before design and fabrication studios would be able to use 3D printing for sculptures, art installations and product replicas.

The 3D printing industry stayed hidden away in manufacturing plants until 2005, when Adrian Bowyer launched the RepRap Project in England. Short for Replicating Rapid Prototyper, the goal of the RepRap project was to develop a 3D printer that could create most of its own parts. More than a printer, it was a concept that aimed to greatly simplify the manufacture and distribution of complex products by allowing them to produce their own components.

The technological advances made by the RepRap project led to the Darwin machine, a rapid prototyping device, and the rising popularity of 3D printers amongst the public.

Crowdfunded projects began to pop up online everywhere, through websites like Kickstarter and GoFundMe. Within a year, Stratasys (a company then known as Object) brought 3D printing to desktop devices. Users could send their designs to a central device and watch them get printed.

In 2013, President Barrack Obama praised 3D printing during the State of the Union Address as having “the potential to revolutionize the way we make almost everything.” He vowed to endorse its transition into mainstream America by asking Congress to create more 3D printing laws and high-tech jobs, a push to make the technology widely adopted.

The Future of 3D Printing

New high-tech 3D printing methods are being developed every year. Raytheon’s early metallic powder patents are being realized with a 3D printer that uses “sand” powder which hardens into an object after a binding agent is applied, allowing for 3D printing of large environments.

3D printers are also catching up to CNC machining with robotic “extruder arms” that extend the depth and reach of these devices. For example, 3D printing was used to create The Europe Building facade for the Council of the European Union. The bioplastics used to print this interactive environment are recyclable, and 3D printing is even being used to help save coral reef environments.

How can the latest advancements in 3D printing services help your next project succeed? Involve a full-service design and fabrication studio early in the planning stages to find out.

A multidisciplinary partner experienced in 3D printing, CNC services and other production methods will identify the best ways to optimize results with efficient use of technology. Take the first step with an introduction to Bridgewater Studio and get a free, customized project plan. 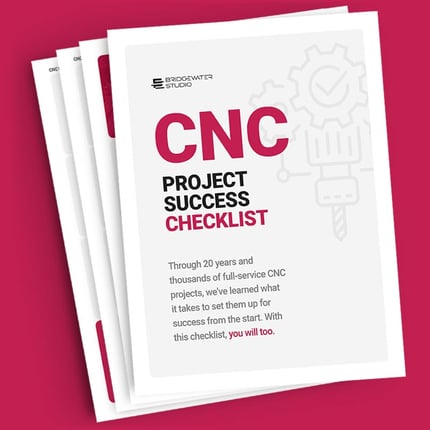 Address the 10 key details in this checklist to get the most out of your CNC project. With thousands of full-service CNC projects completed, we know how to set them up for success – and now you can too.